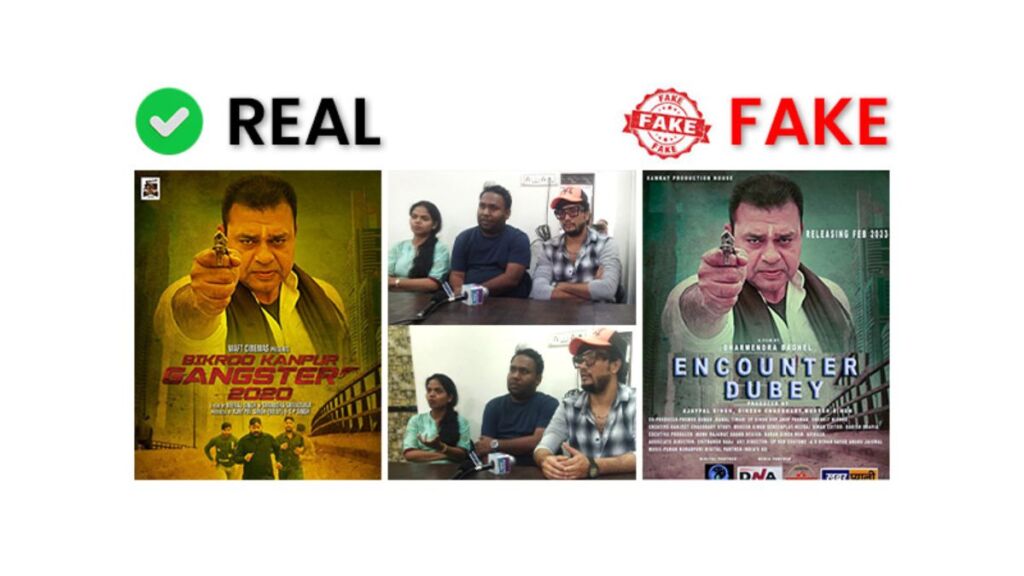 New Delhi (India), January 19: Inspired by the life of gangster Vikas Dubey, the film Bikroo Kanpur is embroiled in a gangster controversy. Producer Ajay Pal Singh cheated and changed the title of the film without informing the co-producer. This film is made under the banner of WAFT CINEMAS. But Ajay Pal Singh has cheated and changed the banner. A press conference was organized on Friday in the Old Mahada area of Mumbai, and it was announced that the film titled Bikroo Kanpur Gangster was shot between December 26, 2020, and January 16, 2021. The film’s co-producer, writer, and director, Shraddha Srivastava, told me that she and Ajay Pal Singh had formed a banner named WAFT CINEMAS. This banner was registered with the Western India Film and TV Producers Association from December 26, 2020, to December 26, 2021. By January 16, 2021, 90 percent of the film’s shooting had been completed at the locations of Agra and Mathura. The film stars Nimai Bali, Anil Rastogi, Shruti Srivastava, Abhinav Parasar, Somnath Yadav, Ujjwal Verma, Sujal, Anil Jain, and Amita Bharat. Titled “Bikroo Kanpur Gangster,” this film is directed by Neeraj Singh along with Shraddha; Neeraj is also the writer of the film. Neeraj said that the film was 90 percent shot under the direction of him and Shraddha Srivastava, and the trailer of the film was released on March 3, 2021, in which Nimai Bali, along with producer Ajay Pal Singh, producer CP Singh, and other actors, were present. 10 percent of the film was left to be shot, which was considered to be shot.

Meanwhile, producer Ajay Pal Singh said that there was no money to shoot the remaining film and brought in the creative director and line producer of the film, Ranjeet Chaudhary, alias Ranjeet Singh, to discuss the money problems prevailing. Ajay Pal Singh asked for all the data on the film, which, in his opinion, can raise money from the market to shoot the film. Neeraj Singh said that he gave him all the data for the film, which was on four hard drives, under an agreement. Meanwhile, it appears that Ajay Pal Singh, the co-producer of the film, and Shraddha Srivastava, without informing Neeraj, changed the title of the film to “Bikroo Kanpur Gangster” and started shooting a person named Dharmendra Baghel in the film. While the film was shot 90 percent by Neeraj and Shraddha, Dharmendra Baghel also tried to take possession of the film wrongly without checking my NOC. The film’s creative director and line producer, Ranjeet Chaudhary, told reporters that he tried to convince Ajay Pal Singh and Dharmendra Baghel that by committing fraud in this way, they cannot snatch credit from the film, but they said that because they have eminent personals with them, we can do anything. Ranjeet said that the story was written by Neeraj, and we started the film together. Shraddha Srivastava was a producer in the film along with Ajay Pal Singh, but Ajay Pal Singh cheated and formed a new production house named Samrat Production House. And the film, whose name was Bikroo Kanpur Gangster, was wrongly registered as Encounter Dubey, and with the help of some regional journalists and a representative of the minister, they shot the film without informing the writers and directors of the original film. Neeraj said that when

Shraddha said that this film is disputed; the dispute case is under consideration in the Western India Film Producers Association, and a written complaint has been filed against producers Ajay Pal Singh and Dharmendra Baghel at Amboli Police Station. It has been done, and now we are also going to court. Ajay Pal Singh and Dharmendra Baghel together have tried to grab the film. All OTT owners and film distributors are requested not to touch this film without knowing it. The production of the film has been done by WAFT CINEMAS only, i.e., the money that was sent by Ajay Pal Singh as an advance to the vendors’ account was transferred by Neeraj Singh to Ranjeet Chaudhary, who was associated with the film as a vendor. Lakhs of rupees are owed to film producer Ajay Pal Singh. Ajay Pal Singh and some powerful people associated with him even told Ranjeet that they would give him money if he supported them, but Ranjeet knew that what he was doing was a fraud. Ranjeet told him that he could not support the wrong, so he thought it right to fight a legal battle. Ranjeet told him that Ajay Pal Singh repeatedly says that he is a producer and can do anything, but the truth is that the rights of the producer are limited. The same is the case with the co-producer as well, and you cannot change the name of any such writer and director who have shot and given you 90 percent of the film. At last, Ranjeet Chaudhary told that the technicians and artists to whom he had given the film still pressurise him for money, and he himself has not been given money by Ajay Pal Singh, and they are repeatedly saying that sometimes they are wrong.

Neeraj ended the conference with the words, “I would like to tell the people of the film industry through this conference that there are such people who take away the credit of the hard-working writers, directors, and other technicians by committing fraud, and in the name of paying money they pressurise others to support them in doing wrong. I have the evidence that is enough to prove them wrong in court.” Neeraj Singh said that it is not understood what the mentality of such people who destroy others’ hard work and creativity is. But they claim their rights. “All the information about this film is in the media; some of the makings of the film is also lying on social media; the people who have worked on the film also know what the truth is; knowing all this, how dare these people act like this?” He added, “We have enough evidence that who is involved in all this will soon open all the names in the media.” Shivam Bhargav Tiwari was present on this occasion.

The post Conspiracy to change the name of the film Bikroo Kanpur gangster to Encounter Dubey, Conference held to address the fraud convicted appeared first on Republic News Today.

Yashpal Sharma is coming with CHHIPKALI, to be released nationwide on March 17

Bzinga to bring its first-ever Hindi show on Zee TV!